What can we help you with?


Get instant answers using the search:

"It is taking a long time to lock targets / exit edit mode" or "There is a delay between my shot landing and LASR picking it up!" for LASR Classic

This could be one of several things: • You could be running LASR at a resolution that your processor can't handle. Try running the software at 320x240 @30FPS, the recommended setting. You should see the image on your screen flicker for a moment when you change your camera feed.

• If this does not resolve the issue, or you absolutely need to run at a higher resolution, try making your target zones smaller, as this reduces the number of pixels that have to be processed (see Target Zone Size below for more details).

• If you feel that you need to run at a higher resolution than the recommended setting, you can try stepping up the resolution gradually. We have found that most modern computers can handle 640x480 just fine. Don't forget that you need 30FPS minimum!

Here is an example of a neat, tidy target zone setup: And here is an example of a target zone setup that would likely cause some lag on certain computers: 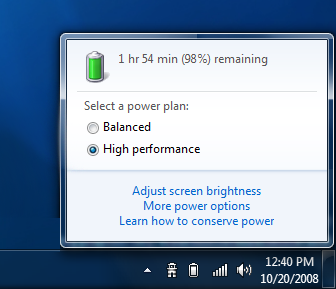 • Especially on laptops, make sure your computer is in "High Performance" mode, and that the processor is not being governed. Even in high performance mode, many laptops govern the processor when running on battery power. You can check this from within your computer's power settings.

• It is possible, especially with prolonged use, that your processor is overheating, and is governing itself in order to avoid burning up. If this is the case, the only option is to shut LASR down and let your computer cool off. Keep in mind that most computers will heat up faster and cool down slower when running on battery power, and some will not fully spin up their cooling fans in order to conserve energy.

• Some background programs can cause performance issues, such as anti-virus scans, as they eat up a lot of processing power and LASR will have to compete for resources. Double-check in your task manager that there are no other unnecessary programs or processes running that could be hogging your machine's resources.

•While LASR can run on lower-end machines, keep in mind that the recommended minimum settings are MINIMUM. For best performance, a modern, multi-core processor is recommended.